At Codio, we understand the need for instructors to see what's going on in their courses. With this in mind, we have created a series of learning insights dashboards for instructors, enabling them to be proactive in their interventions or at least have the ability to evaluate particular lessons with regard to class performance. For example, do we need to go back and remediate some issues because this particular module or assignment is difficult?

I know when I was in the classroom, I would often ask students, how are things going? How's your project coming along? I often heard “fine”. And then when they turn in the assignment, I would realize things aren't so fine. But by then it's too late, they've earned a grade that's probably not what they want, and they're not demonstrating mastery of a particular skill set. So the idea behind this is that we can intervene before it gets to that point.

Take a look at the video above. The first dashboard is class insights. Just like the title implies, we're looking at the performance of the class across time and all of the different modules. Then you'll see graphs about how long students are spending, what kind of grades are they getting, average grades, etc. But you can also get a little more granular. You can evaluate just one particular module. You analyze the module’s difficulty, are students struggling or do they need something more challenging, etc.

We have that information available to you in these learning insights. You can look at just a particular assignment or student as well. You have access to all sorts of information degrading how students are performing on independent assignments as a class. And you can also see if a student is struggling or thriving in certain modules and assignments and identify which ones those are. But these dashboards aren't enough. We want to dig even deeper. We want you to understand what it is your students are doing. Codio is now implementing something where we look at coding versus debugging time as you see above. You'll see in these columns that the time in green or the green bar represents how much coding is going on. And then the red indicates how much debugging is going on. And we do this because we can look at keystrokes. A grade doesn't necessarily tell you exactly what's going on with the student.

So we're trying to dig deeper. And this is one of the first things that we're rolling out in terms of, they got a grade, but how did they get that grade? Did they really struggle with this, or spend a lot of time debugging to get it? Or did they kind of breeze through and figure it out, with a bunch of coding time? So we are trying to peel back the layers. We're trying to give you as much useful information as we can so that you can make decisions about how you want to conduct your classroom.

One of the coolest features, I think when it comes to Codio is Code Playback. This allows you to see the work the student is doing. You can open a student project, find a particular file in the IDE, and you can open up the Code Playback tool. In the video above, you’ll see an animation, this is what is happening as the student writes code, you'll see as they add code, as they delete code, etc. This gives you an idea of what it is they do, what they are struggling with, and what they are not doing. You can look across several students and might even notice some patterns. And maybe that can inform you on how you want to address your next lesson. This is also a very rudimentary form of version control.

I had the opportunity to teach with Codio, and I would get more than one email from a student saying, "I know the project is due tomorrow night, I've been really hard at work on it. And when I opened up Codio today all my a code was gone." I could walk them through by opening up the Code Playback tool. And I would ask them, "When did your code work?" And they'd be like, "Oh, last night around 8:30." And if you look at the bottom of the animation and notice there's a date and timestamp. And as you go through this, the date and time timestamp changes. I told the student to move that scrubber to 8:30 last night and their code is there. And they can take that code, they can copy it, and then they can paste it back into their IDE. They've got their code back. They don't have to redo the entire problem from scratch.

Code Playback also works for the content pages that you created markdown. I too have made careless mistakes and erased an entire page of content. And I worried about having to redo the entire thing and I don’t.

Code Playback is a really handy feature. It is useful as a pedagogical tool and as a content creation tool. While we don't like to talk about it, plagiarism can be an issue. And if you have a potential case where you think plagiarism might be a problem, you could always open up the Code Playback tool, and take a look at the student code. If you see large chunks of code being added within seconds, that might be an issue. And that might be something you want to investigate a little bit further.

You'll also notice that we are collecting keystroke data. We save that, and we go back and use this for our Code Playback tool. If you're interested in research and need keystroke data, Codio might be a great platform for you to use in your research, because we're already doing this. In addition, we have a great team of developers, and they're very accommodating. And if you need to tweak it a little bit, and what kind of data is collected, how it's collected, or any of these kinds of things, you should reach out to us.

We're more than happy to help and give you the product that you need. This is a great opportunity for you to not have to worry about building custom one-off tools, as we can help out with that. We've got something in place that's already collecting a fair amount of data, and that will help you in the research process. 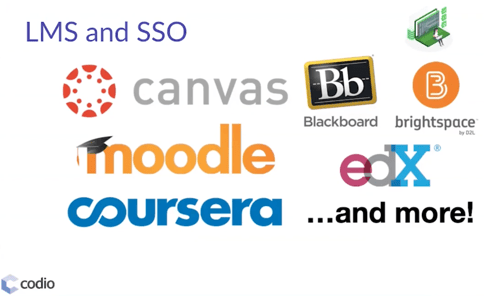 I'd also like to talk about interoperability. And I mean that in the traditional sense. Codio works with a variety of third-party services and applications. One of the things that is really important to us is making sure that users get all of our great auto-grading features, but then that data and information is sent back to your LMS for the official grade keeping. And we work with a wide variety of LMSs, and we allow for single sign-on options.

Anything that supports the LTI standard, we can work with. Some of the LMSs we work on the graphic above and there are many more. We allow the opportunity of any grading that's done in Codio, which is immediately passed to your LMS. You don't have to manually take grades from one silo and put them in another, there is interoperability between them. 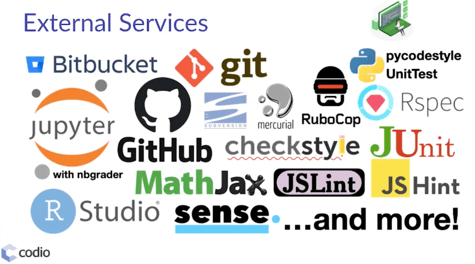 We also work with a ton of external services. We have highlighted a few of them in the graphic above. And this list is not exhaustive, there are many more that we work with. But things like Git are really important for developers. They knew that, and when they built the Codio platform, Git is a first-class citizen. We use Git for all kinds of stuff, and we make it really easy to create content using Git. to back up using Git, we even got little graphical menus to help out if your students are new to Git, and they don't want to use the command line. We know it's important. It's important to us. It's important how we write content, and we make those same features available to anyone, whether they're teachers or students.

Our developers have spent a lot of time on Jupyter Notebooks. You can open up a guide and see a Jupyter Notebook right there. You get all the features that you want. It works seamlessly with Codio. I know there are many of you out there that really like Jupyter Notebooks, and you don't have to sacrifice anything if you decide to use Codio. There's been a lot of integration of unit testing for Python in Java.

If you want to write a unit test for student work using Python or Java, we've really streamlined that process within the Codio platform. We have linters for JavaScript. RStudio can run fully within Codio. You're not making any sacrifices. You get all the features of grading scripts and feedback, and all of these things that we've been talking about, that are available too in our studio. And so again, I'd like to go back to the fact that Codio runs on Ubuntu. If it runs on Ubuntu, it should run on Codio. There are all kinds of external services that we can use to augment your teaching, to make it more engaging for your students. And we work with a lot of different external services and products.

But when we talk about interoperability, we're not just talking about software. At Codio, we want to work with the largest number of students possible. And that's why we're very proud of our commitment to accessibility. Codio meets the Web Content Accessibility Guidelines, 2.1 standards at Level AA. 2.1 is the highest standard. 2.2 is currently in draft, and will be released later this summer.

In addition, we've also switched to the Monaco editor. That's the same editor used in VS Code. And it's one of the few editors on the market that it's compatible with screen readers. If you have students that happen to be dyslexic, we have not only IDE themes for them, but for the content that you write, there are special themes used for them as well. So everything presented on Codio, right, is accessible. And we're working to maintain a high level of accessibility. And this is something that we're proud of and will continue to do. And as the standards change, we will evolve with them.

Patrick is Codio's Director of Content. He has spent the last eight years teaching computers and programming to students in K-12 schools.