There are many challenges around grading: inadequate GA/TA resources, providing timely feedback to students, and notably in CS, the incompatibility of a student’s development environment and the grading environment (resulting in the dreaded “but it worked on my machine!”). 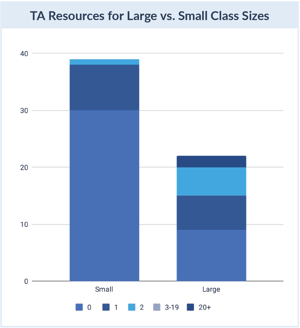 Manual grading is a bigger concern for those with small classes (< 50 students), with 79% saying it was their greatest challenge in terms of grading/feedback. 63% of instructors with large classes ranked manual grading time as their highest-priority pain point.

The majority of respondents (63.9%) lacked access to grading or teaching assistants. Of those who reported having GA/TA support in their largest class, 36.4% had two or more for the 2018/2019 academic year. The distribution of grading support looked strikingly different for teachers with under 100 students (small-scale) versus those with over 100 students (large-scale). 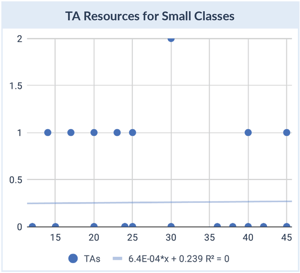 For respondents teaching small classes, there was no discernible correlation between the total number of students and the total number of TAs per professor. The majority of teachers in this group do not receive any TA support. This probably contributes to the higher concern amongst this segment than instructors in larger classes which often have grading help.

A weak correlation between total students and TAs for a professor was found for those teaching at scale. The model equation has a coefficient equivalent to a 1:73 TA to student ratio. Looking at the chart reveals a handful of teachers with courses well below that daunting ratio. This indicates that many teachers are overburdened and lack the necessary support, indicating a need for scalable technology as student-to-teacher ratios increase.

It is clear that there is a demand for an easy-to-use, auto-grading product that gives meaningful feedback to students. 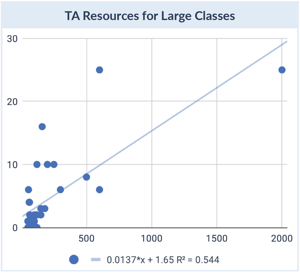 Anecdotally, we know that many departments have either homebrew submission systems or resort to manual grading. Some use built-in LMS features like rubrics, or existing free tools like codeworkout and web-CAT for auto-grading.

Others use paid services like Gradescope (which was recently acquired by Turnitin, a plagiarism tool) which allows both manual and auto-grading. It is clear that there is a demand for an easy-to-use, auto-grading product that gives meaningful feedback to students.

Codio's comprehensive Global Assessments Library provides educators with a database of editable, auto-graded questions. Each assessment is completely editable, so you can add your own twist to it, and all assessments contain example solutions and explanations of answers for students. Some also include notes for teachers to better convey the assessment’s intended learning objective.

Learn more about our Global Assessments Library and Codio's auto-grading capabilities by requesting a demo or a complimentary free trial today.