Year in Review: How are Educators using Codio?

We know that different institutions use Codio differently – some as a textbook replacement with auto-graded weekly homework, others for longer-form programming projects. Many instructors leverage our assessment engine for auto-graded quizzes and tests. Of the 5 million assessments completed in 2022, over 87% of them were auto-graded by the Codio platform, usually offering learners instant feedback.

Across the different ways Codio is used, we can see that it is meaningful adoption. Learners engaged with the Codio platform, on average, for more than 15 hours. In the context of a 15-week university semester, that means a learner spent over an hour a week on Codio! 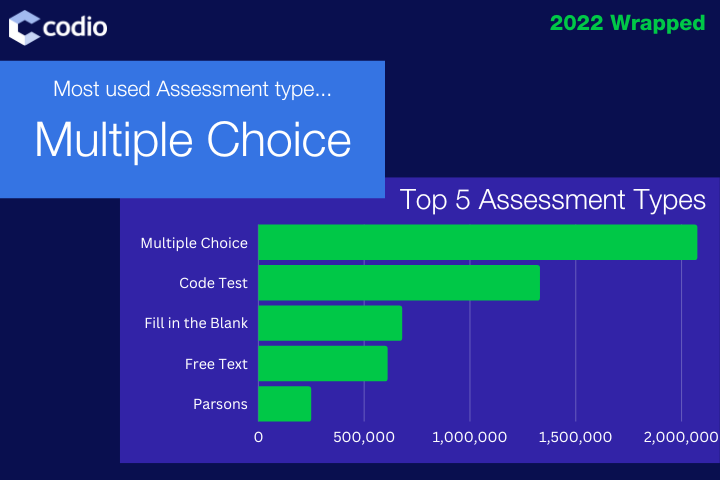 The third most popular assessment type is fill in the blank, which on Codio supports Regular Expressions for smarter matching as well as using drop downs with distractors to help avoid mis-spelling.

Parsons puzzles, new to Codio in 2019, have grown in popularity and are now the fifth most popular assessment type. Codio supports not just hard-coded parsons auto-graders, but also variable checkers and unit test graders which actually test the constructed code’s functionality.

The vast majority (over 70%)  of assignments contain a single panel page in guides. It is common for instructors to present markdown-formatted text, images, and embedded videos similar to how one might design an ebook. Codio usage goes beyond textbook replacement, with more than half of assignments using a 2-panel layout, typically to open a code file (or Jupyter Notebook) for learners to have hands-on practice. Almost a third of assignments use a 3-panel layout, generally opening a terminal for user-input-driven programs or a browser for previewing websites, or a virtual desktop for graphical output, in addition to a code file. 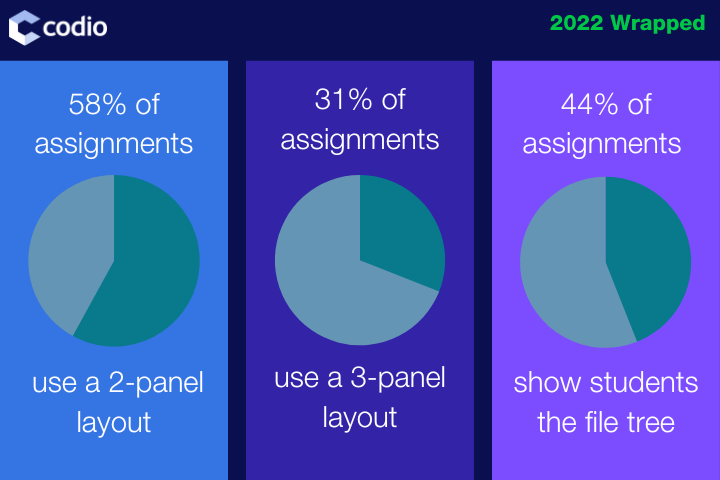 Codio started life as a cloud-based IDE for professional developers, so has all the tools typical of a fully-featured IDE, such as a debugger. This is particularly useful for larger, multi-file projects in courses beyond introductory programming courses. Content authors used a more full-feature IDE layout by revealing the file tree to learners, allowing them to create and open files in 44% of assignments. 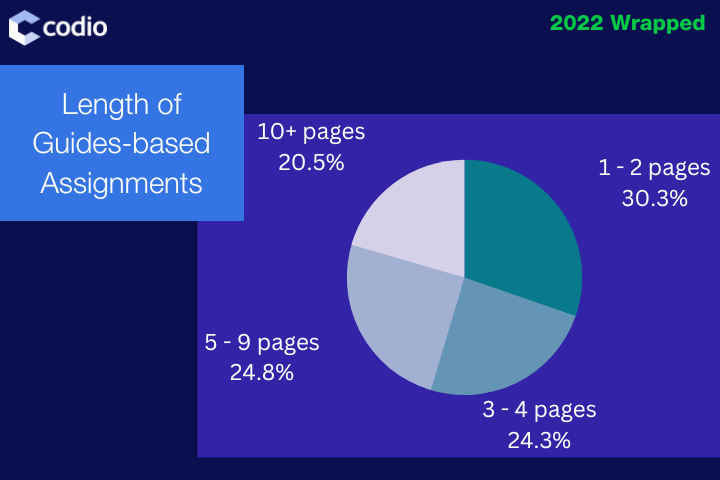 Codio has an environment templating via our stacks feature – making it easy for students to start working on their assignments without having to struggle with the installation of the exact version of languages and libraries.

While learners have a number of options for developing code for Codio-powered assignments, including developing on their local environment and synching with their assignments container (using version control or our Desktop app) or using a third-party code editor such as RStudio or Jupyter within the assignment container, many use Codio’s built-in, full-featured code editor, which is built on Monaco, the same accessible code editor in VS Code. 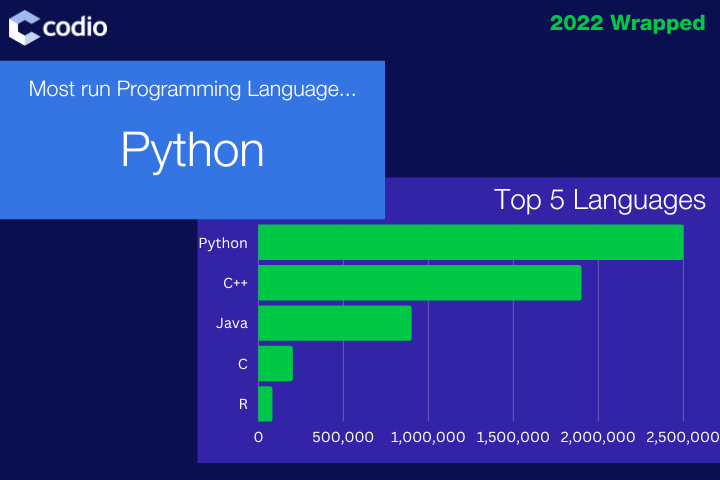 Looking at the file extension of compile and run events via instrumented IDE buttons, python is the most-run programming language on Codio, followed by C++ and Java. This may be predictable given their popularity in introductory programming languages. C, a language often taught in upper-level programming courses, is the fourth most common with R coming in fifth.

As we go into 2023, we predict seeing even more adoption of our Virtual Machine capabilities for Windows-only tools and our newly released parameterized assessments which allow randomization of parts of assessments.

We also expect to see an increase in usage of our paired programming feature with the increased ease of duplicating groups from one assignment to another. This is particularly useful for milestoned programming projects which use our copy workspace functionality to seamlessly roll students’ work from one assignment to the next – allowing more transparency into student progress through long projects.

Finally, we are looking forward to releasing improvements to our code playback feature and built-in code plagiarism tool early in the new year!

Elise is Codio's VP of Product & Partnerships. She believes in making quality educational experiences available to everyone. With a BS in Computer Science and a PhD in STEM Education, she has spent the last several years teaching robotics, computer science and engineering. Elise now uses that experience and expertise to shape Codio's product and content.